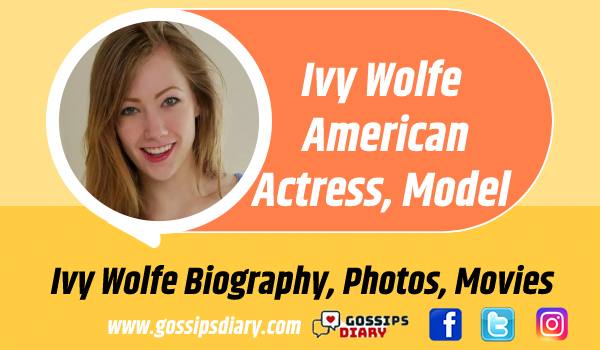 Who is Ivy Wolfe?

Ivy Wolfe is a multi-talented American adult actress from Portland, Oregon, United States. Born on 3rd September 1996, this hot Caucasian star is good at singing, modeling, and photography. In her interview with Fresh Faces, she revealed that her inspiration behind singing is Amy Winehouse and that she idolizes her and the grace with which she performs raunchy scenes. Ivy Wolfe joined the adult industry in 2017 and has worked with Passion HD, Nubiles, Burning Angel, and many other acclaimed productions. It’s interesting to know that she also admires the famous American writer, Oscar Wilde. Her quote: “You will always be fond of me. To you, I represent all of the sins you never had the courage to commit”, inspires her to give her best in whatever she does.

Ivy joined the adult industry after she discovered that its liberating environment of it attracted her. She no longer had to suppress her desires, which pushed her to give her everything to this industry. She has also done many group scenes for Girlsway alongside Scarlett Sage, Carter Cruise, and Natasha Nice. You might have also heard much about her Never Enough scene with Mick Blue.

Born in Portland, United States, Ivy Wolfe is a high-school graduate who joined the adult industry after completing her studies. According to one of her interviews, she was inspired to join the adult industry seeing her roommate doing the same. It’s from her roommate that she learned about the liberating environment of this industry.

She believes and has also experienced that other jobs can only offer her limited freedom. But working as an adult star made her realize she could be her boss, work according to her schedule, and feel alive and badass. It’s a kind of enjoyment for her where she can put on music and bump in. She worked her ass off in this profession and has been recognized as Twistys Treat of the Month and Penthouse Pet of the Year.

Before entering the adult entertainment industry, Ivy Wolfe worked as a manager at a sandwich shop in Portland. However, working under someone never excited her. She had no time for her or her desires, which restricted her. However, in 2017 she finally entered the profession that made her feel alive. Although she has been in the adult industry only for five years, she has earned an avid fan following.

Unlike other adult stars, Ivy doesn’t believe in hiding her profession from her friends and family, and she reveals the same in her interview with Fresh Faces. Ivy wants to remove the stigma attached to this profession and live her life on her terms without any regrets. Over the years, she has performed for numerous best-selling DVD productions such as Music Box, the Net Video Girls production, Amateur Wanted, and many more.

Ivy Wolfe has a perfect and breathtaking body. Her love for dancing and yoga has helped keep her weight in check. She is 5’4’’ tall and has a body weight of 50 kg, which is ideal for someone of her height. Her bra size is 32B, and her small breasts compliment her extra-thin waist of 22 inches and hips of 32 inches. People are crazy for her model-like body, green eyes, and seductive personality.

Although Ivy Wolfe joined the adult industry only a few years back, it is not reflected in her net worth. She has a net worth of $1 million which is at par with many well-established adult starts. Earning this much money at the age of 26 is commendable.

Ivy Wolfe is all about social media and the digital age. She will be active on famous social media platforms like Instagram and Twitter. She also loves to connect with her fans on OnlyFans

It seems that this young adult star believes in keeping mum about her dating life. As per sources, there’s not much information about her past relationships or current boyfriend.

As per Ivy Wolfe’s Biography, little is known about her family except that they share a Caucasian ethnicity. It is also clear that Ivy has not hidden anything about her profession from her parents.

Q3. What is Ivy Wolfe’s weight?

Q4. What is Ivy Wolfe’s nationality?

Q5. Who is Ivy Wolfe married to?

Q6. What is Ivy Wolfe’s ethnicity?

Q7 Where was Ivy Wolfe born?

Q8. Where does Ivy Wolfe live?

Q10. When is Ivy Wolfe’s birthday?