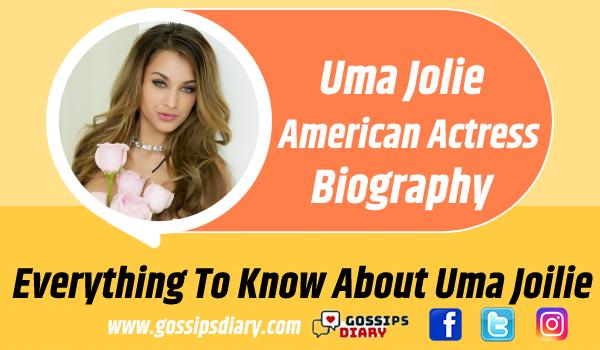 Who is Uma Jolie?

Uma Jolie, Girlway’s Girl of the Month, is a rising American starlet, adult actress, and cam model with mixed Romanian, Hungarian, German, and Russian heritage. She was born on 8th April 1995 and is currently 27 years old. Born in Fairbanks, United States, Uma Jolie spent much of her life in Los Angeles. However, she later moved to Florida to focus on her career without interfering with her friends and relatives. When she was in Florida, she made connections and made her debut in the adult industry in 2014. It was in her teens, at the age of 18, that an adult talent agent contacted her via Facebook. It was when she did her first lingerie shoot.

Soon, she got a lot of bikinis and shot projects from the same agent. She also did many adult productions starting in the year 2015. Apart from her work life, Uma Jolie loves knowing more about astrology. She believes in the power of Astro and Tarot cards. Also, you would love to see the story behind her nickname. When she was younger, her friends used to call her Uma because she had straight bangs like Uma Thurman in Pulp Fiction. In the Adult DVD Talk interview, she recounted how she thought of keeping the same name and taking the last word from that of Angelina Jolie because she resembled the actress.

Uma Jolie has completed high school in her native place. However, from her childhood, she was attracted by the world of glamour. She used to do a lot of beauty pageants as a child. Moreover, unlike conventional parents, her mom supported her in doing artistic stuff. Hence, she never stopped herself from getting comfortable with her body. Furthermore, she grew up in the hills, and therefore, she loves hiking.

In one of her interviews, she mentioned how she loves the scenic beauty of hills, hiking, spending time near beaches, and astrology. As per Uma Jolie’s Wikipedia, she enjoys reading stars. She also mentioned that she always prefers hanging out with intelligent people from whom she can get to learn something.

This gorgeous green-eyed diva is 5’3’’ inches tall. The credit for her athletic body goes to her love for hiking and gymming. She is 48 kg (106 lbs) and has a slim waist of 23 inches. On the other hand, her breasts and hips are big and 34 inches in size.

She has achieved tremendous success and fame since her debut in 2014. At the young age of 27, she has many noteworthy titles, including  Girlsway‘s “Girl of the Month”, Cherry Pimps’ “Cherry of the Month”, Twisty’s “Treat of the Month” and Vixen‘s “Angel of the Month.” This gorgeous rising starlet began her mainstream modeling career in her teenage.

What is the net worth of Uma Jolie?

The net worth of Uma Jolie as of 2022 is approximately $2 million. Her primary source of income is her nude shoots and adult scenes.

Uma Jolie loves staying active on social media. She believes that to gain success, the support of her fans is necessary, and it cannot come unless she keeps her fans updated on social media. You can find her sizzling videos on her YouTube channel or follow her on Instagram @officialumajolie.

As per sources, there is little known about Uma Jolie’s boyfriend or current relationship status.

As per Uma Jolie’s Wikipedia, she belongs to a close-knit family having mixed heritage. She is close to her family, and her mom encouraged her to do beauty pageants when she was young.

Q4. What is Uma Jolie’s nationality?

Q5. Who is Uma Jolie married to?

Q6. What is Uma Jolie’s ethnicity?

Q7. Where was Uma Jolie born?

Q8. Where does Uma Jolie live?

Q10. When is Uma Jolie’s birthday?