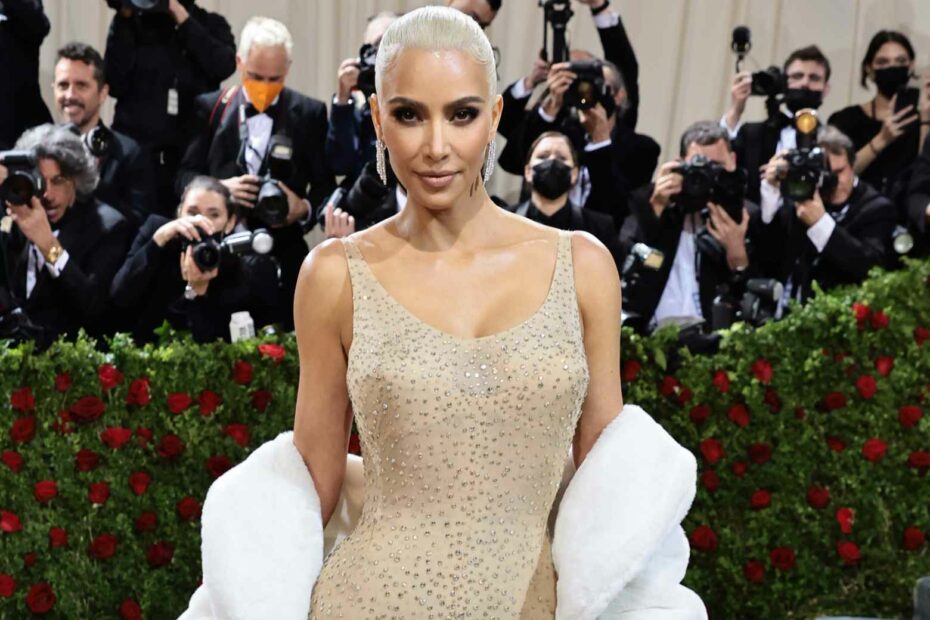 So the Kardashians don’t promote the healthiest body standards—this has been true for a long time, and none of us should be surprised. We’re talking waist-training, laxative tea, and slim lollipop-promoting, Photoshop-addicted individuals here.

Even Kim Kardashian, I thought, would stop short of gloating about a crash diet she went on merely to fit into a dress. I mean, she’s so 2002, right?

Unfortunately, I was very optimistic: the SKIMS creator triumphantly told Vogue at the Met Gala how she squeezed into Marilyn Monroe’s legendary gown.

“I tried it on, and it didn’t fit me, and so I looked at them and I said, ‘give me like three weeks,'” she described. “And I had to lose 16 pounds down today to be able to fit this, but it was such a challenge, it was like a roll. I was determined. I was determined to fit it.”

In Vogue’s following piece, the celeb described how exactly she lost those 16 pounds. “I would wear a sauna suit twice a day, run on the treadmill, completely cut out all sugar and all carbs, and just eat the cleanest veggies and protein,” she entailed. “I didn’t starve myself, but I was so strict.”

Kardashian’s statement sends the message that it’s OK, if not desirable, to go on a crash diet to fit into our clothes. And, while many of us have done or desired to do it, I want to be clear that it is not acceptable. Clothes should be tailored to you, not the other way around. If Kardashian wanted to fit into this extremely particular gown, that’s her prerogative, but she should keep that information to herself rather than encouraging her fans to do the same, as that’s just one step away from openly advocating disordered eating.

I’m not the only one that gets irritated by this: Not only are op-eds denouncing Kardashian’s story appearing left and right, but public people are also voicing their distaste loud and clear.

“To walk a red carpet and do an interview saying how starving you are because you haven’t eaten carbs in the last month … all to fit in an f–king dress?” actress Lili Reinhart wrote in her Instagram Stories (via In Touch Weekly).

“So wrong. So f–ked on 100’s of levels. To openly admit to starving yourself for the sake of the Met Gala. When you knew very well that millions of young men and women are looking up to you and listening to your every word.”

Jameela Jamil also addressed the incident, writing on Instagram Stories, “All I will say is: celebrities, if you do something as unhealthy as deliberately losing 16lbs in 3 weeks, please don’t publicly announce it.” Yep.

If you want to lose weight, doctors recommend losing no more than 1-2 pounds each week in order to do so safely. “Everyone is different, and the amount that is appropriate to shed in a week varies according to body type,” says Penny Weston, founder of the MADE wellness center and a fitness, wellness, and nutrition expert. “A safe rate of weight loss of 1-2 pounds per week is advised for healthy weight loss.”

“It is no surprise with this sort of gloating about what is frankly disordered eating and starvation under the guise of discipline, ‘health,’ power and beauty that we have coincidentally seen rates of eating disorders double between 2008-2018,” Robinson tells Marie Claire.

If you want to lose weight, experts recommend losing no more than 1-2 pounds per week in order to do so safely. “Everyone is different and the amount which is suitable to lose in a week varies according to body type,” says Penny Weston, a wellness, fitness, and nutrition specialist and founder at the MADE wellness center. “A weight loss of 1-2 pounds per week is recommended as a safe rate for healthy weight loss.”