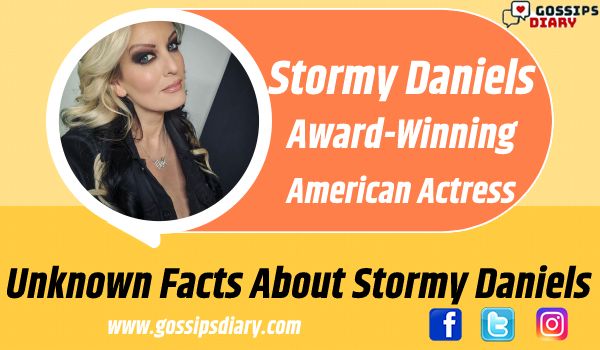 Who is Stormy Daniels?

Stormy Daniels is an award-winning American adult actress, director, and former stripper. Stephanie Gregory Clifford is her real name, but she is professionally known as Stormy Daniels. On March 17, 1979, she was born in Baton Rouge, Louisiana, United States. In 1997, she graduated from Baton Rouge’s Scotlandville Magnet High School and decided to become a journalist.

43 years old stormy has won multiple industry awards and is also a member of the NightMoves, AVN, XBIZ and Halls of Fame. Following a recruitment campaign in 2009, she explored running for Senate against incumbent David Vitter in her home state of Louisiana in 2010.

Stormy Daniels’ height is around 5 feet 7 inches (170 cm), and she has blonde hair with blue eyes. She’s got a good physique with a cute smile. Most of her fans fantasize about her gorgeous looks and are also crazy about her figure. Her body measurements size is 38-26-36 Inches, and she keeps maintaining her figure.

As per Stormy Daniels’s Wikipedia, she also had an affair with a politician, Donald Trump. In 2018, Daniels became involved in a legal dispute with President of the United States Donald Trump and President Trump’s attorney Michael Cohen. Allegedly, Trump and his allies paid Stormy Daniels an amount of $130,000 in hush money to silence her about an affair that the two of them had in 2006.

Stormy Daniels is a well-known name in the pornography industry. She began her career as a dancer when a friend persuaded her to do a “guest set” at a strip club. At that time, she was just 17 years old. She got her start in the adult entertainment industry by stripping for money at the Gold Club in Baton Rouge. After that, she became a featured performer with Continental Theatrical Agency in the year 2000.

Stormy Daniels is her stage name, which was selected for her in recognition that Nikki Sixx, bassist for Motley Crüe, named his daughter Storm. Because Daniels had bet $500 with another actress on the likelihood that Jesse Jane would win the “Best New Starlet” Award in 2004, she was surprised when she won the award. Wicked has been under her direction since the year 2004.

Sheila Gregory and Bill Gregory are the Daniels’ parents, and they divorced between three and four years after their daughter was born. After that, her mother was responsible for her upbringing. She has described herself as a “impoverished neighborhood” and stated she came from an average, lower-income household… Those were days without electricity.

Pat Myne and Stormy Daniels were married from 2003 until their divorce in 2005, after which Pat Myne legally changed his surname to Clifford. During their marriage, Stormy Daniels was known by her married name. Her second spouse was Michael Mosny, sometimes known as Mark Moz, and they were married from 2007 to 2009. In July 2009, she was held by Many in connection with a domestic abuse accusation. In 2010, she wed Glendon Ctrain, making it her second marriage. On the other hand, Crain (Brendon Miller) submitted a divorce petition in July of 2018.

She has been nominated for best actress and director honors by AVN, XBIZ, XRCO, and many other organizations, and she has won many prizes throughout her adult career.

What is the net worth of Stormy Daniels?

As of 2022, Stormy Daniels has earned a net worth of around $2 million. The primary source comes from her work in acting, modeling, and OnlyFans. Her primary source of income comes from adults working in the adult entertainment sector, in addition to endorsement deals.

She has an active presence on social networking sites, including Twitter, Instagram, and Onlyfans. She keeps an active lifestyle and also regularly posts videos and photos. On Instagram, she has over 322 thousand followers, and she has approximately 1200 posts.