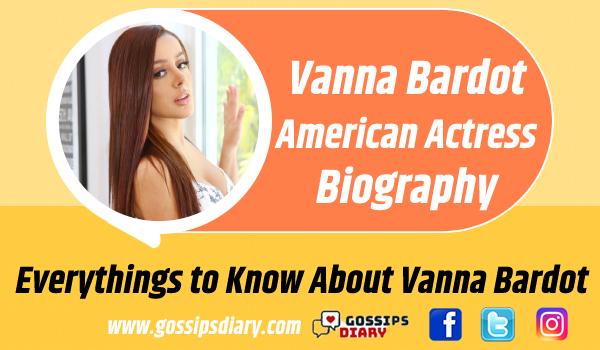 Who is Vanna Bardot?

Vanna Bardot is an extremely young, beautiful, sizzling pornographic actress who started working in the adult industry in 2018. She was born in Miami, Florida, on 3rd February 1999. In a short span of her career, Vanna has starred in Girlfriend Films, New Sensation movies, and Evil Angel. Vanna is a born performer who was never shy to face the camera. Her bold attitude and outgoing personality made her open about s*x and her sexuality. She used to watch a lot of adult shows growing up. This is how she developed a fascination for the adult industry.

Her favorite female adult stars are Sasha Grey, Stoya, and Leigh Raven, to name a few. At the same time, her favorite male stars are Oven Gray, James Deen, Xander Corvus, and Manuel Ferrara. She celebrates her birthday on the 3rd of February of every year. Vanna is well-known for hosting lusty live cam shows via MyFreeCams. She believes it’s imperative to figure out what one likes and dislikes before making any career choice, and that’s exactly what she did in her case.

In one of her interviews, Vanna Bardot revealed that she was a very rebellious child growing up. She was that girl in high school who loved going against the rules. Vanna loved wearing shorts in her high school, which was against the norms of the school. She was also famous for partying a lot. Surprisingly, within a month of high school, she lost her virginity.

She recalled how she used to do research on the adult industry, watch dirty shows, and explore her sexuality. That’s what made her inclined to the pornographic industry.

She is a skinny, little gorgeous adult star with 32 inches breasts and 34 inches wide hips. Her waist is extremely slim and just 25 inches in size. Vanna is 5’4″ tall, and her weight is only 45 kg.

Before joining the adult industry, Vanna wanted to become a hair and makeup artist. She started working in the salon at age 15 and continued it for 3 years. Due to her unhappiness with her career, she decided to move beyond the ordinary and do something ground-breaking. Hence, she started investing in adult film talent agencies.

Vanna is famous for her sizzling scene Vanna Bardot Gets Her First Taste Of West Coast Cock! with Jay, which was released via Bang!.com in June 2018. Her kinky The Headgear Hottie shoot with Tyler Nixon was promoted via Team Skeet in July 2018, and she uploaded her raunchy Ballet scene with Alex Legend via NaughtyMag.com in September 2018. Her saucy Deep Throating Nerd shoots with Jack Vegas, which was filmed for 18eighteen.com in September.

In a short span of 4 years, Vanna Bardot has built a massive fan following and respect in the adult industry. Her excellent work pays off well, and she has an estimated net worth of $1 million as of 2022.

In her 2018 Fleshbot interview, Vanna Bardot mentioned that she loves interacting with her fans on social media. She feels it’s only because of her fans that she has been able to reach where she is today. She is thankful to her fans for supporting and admiring her. Her love for her fans makes her active on social media platforms, including Instagram. There’s no doubt that she has a whopping 414k fan following on Instagram.

Vanna Bardot gets pissed off if asked any personal questions in public. She remains silent on her current relationship status.

According to Vanna Bardot’s Wikipedia, nothing is known about her family.

Q1. How old is Vanna Bardot?

Q2. How tall is Vanna Bardot?

Q3. What is Vanna Bardot’s weight?

Q4. What is Vanna Bardot’s nationality?

Q5. Who is Vanna Bardot married to?

Q6. What is Vanna Bardot’s ethnicity?

Q7 Where was Vanna Bardot born?

Q8. Where does Vanna Bardot live?

Q10. When is Vanna Bardot’s birthday?

Q11. How much is Vanna Bardot’s Net Worth?