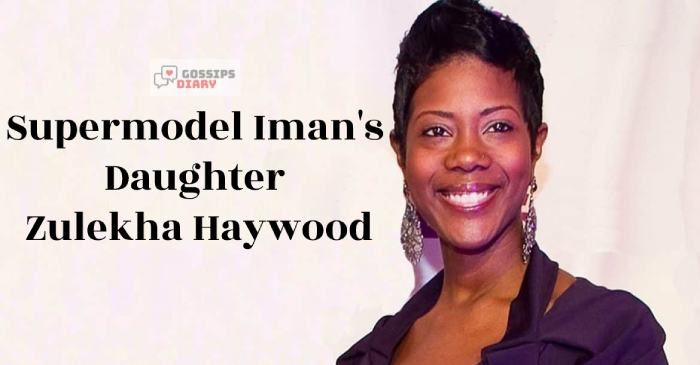 Who is Zulekha Haywood?

Supermodel Iman’s daughter Zulekha Haywood, was born on July 5th, 1978 in the USA. Her father was also a famous NBA basketball player named Spencer Haywood. She was an African American of Somali descent with American nationality. Both of her parents were successful, which is why she has always been in the spotlight. Instead of focusing on her parents’ success, she decides to take a different path and focus on her education. Even though she is a celebrity child, she is an accomplished businesswoman who has worked with different firms. She also made a name in the business world after getting her start at her mother’s company.

From her childhood, she has had problems with obesity, and she has been on a diet. She even developed heel spurs and swollen knees that made it painful for her to get out of bed. She contacted a bariatric surgery specialist surgeon and underwent a gastric bypass in 2008. The surgery went successfully and she has held up much better and with a lot more confidence.

Her height is 5 feet 6 inches tall, or 167 cm. Her weight is 62 kg or 136 lbs, and she has hazel-colored eyes and black-colored hair. Due to her weight, Zulekha had been struggling since her childhood. Even though she occasionally loses weight, she eventually gets it all back. She even underwent gastric bypass surgery in her 20s to get rid of her weight.

She is a successful businessman and entrepreneur just like her mother. She started her career by working as an accountant for her mother’s cosmetic company. Zulekha worked there for three years, then was promoted to accountant manager in 2002. She did a lot of hard work to deserve her next promotion. A few years later, she became revenue and demand planning manager. She works for 8 months and then leaves the company. With all this hard work, she became an experienced strategist with over 10 years of professional marketing experience.

Zulekha Haywood’s father is an Olympic gold medal winner, Spencer Haywood, and her mother is a famous supermodel, Zara Mohamad Abdulmajid, also known as Iman. Her parents divorced when she was just five months old. She has a big family with five half-siblings as her parents remarried. Zulekha Haywood’s siblings are Alexandria Zahra Jones, Duncan Jones, Shaakira Haywood, Nikiah Haywood, and Isis Haywood.

Being the daughter of a celebrity, she seems to be media-shy. She also keeps her romantic life hidden from the public eye. Zulekha Haywood’s husband is Jason Young, who was her long-time soul mate. On the other hand, they even tied the knot in a private ceremony. She also has a daughter named Lavinia, to whom she gave birth in July 2017.

She is only active on Twitter and keeps posting photos and tweets. You can only follow her on Twitter to know more about her. She is not available on other social media channels.

Q1. How old is Zulekha Haywood?

Q2. How tall is Zulekha Haywood?

Q3. What is Zulekha Haywood’s nationality?

Q4. How much does Zulekha Haywood weigh?

Q5. Who is Zulekha Haywood married to?

Q6. What is Zulekha Haywood’s ethnicity?

Q7. Where does Zulekha Haywood live?

Q8. Who is Zulekha Haywood dating