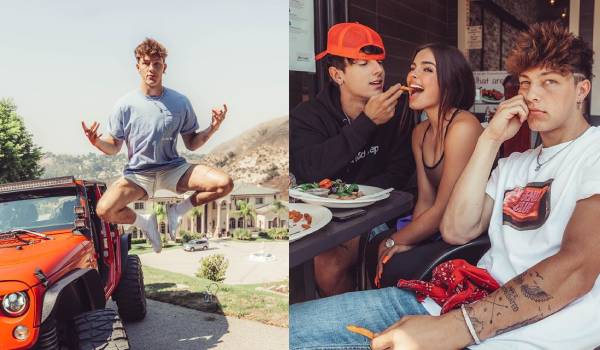 Who is Tayler Holder?

Tayler Holder is an American social media personality, a famous Tiktok Star, Singer, Instagram Star and YouTuber, originally from Texas. He is also a very renowned Instagram influencer and celebrity. At the age of 3, Tayler Holder competed in and race in motocross while in Texas. At the age of 18, he moved states and came to Los Angeles, California, to pursue his dreams and become the star he is today.

How did Tayler Holder get into Tiktok?

Tayler Holder started at the time when Tiktok was known as Musical.ly. He began by making funny, lip-sync videos. Tayler has more than 15 million followers on Tiktok. He was a part of the Hype House but left soon after.

Tayler Holder Instagram Star – In the long run of his Instagram career, he has garnered over 5.4 million followers. He posts with a frequency of 1 post every three days, which receives more than 500 thousand likes and more than 1500 comments.

Some Facts About Tayler Holder You Don’t Know.

Once he moved to LA, he started making lip-sync Tiktoks through which he gained popularity. He started his YouTube channel for his songs. In 2017, he released “Who am I” and “Fall back” in 2018.

Now he uploads fun vlogs and challenges every week on his YouTube channel, which has 1.67 million subscribers to date. He has been on a talk show called “Brat Chat” as a guest. He has also starred in the series “Total Eclipse” and “Dirt” in 2018-2019.

With a pretty successful career in Tiktok and the YouTube industry, he has received many brand sponsorships to date. All of this and many various factors together have made Tayler Holder’s net worth an estimated $3 million in 2020!

Supportive Backing Everyone Needs – The Family

Taylor was born and raised by Wendy Holder (Instagram handle @wendyholder having over 46 thousand followers) and Monte Holder. Tayler has two siblings: A brother named Trever, and an adopted sister, Abby. Tayler is the youngest in his family.

Where can you connect with Tayler Holder?

How or where Sommer Ray and Tayler Holder met is unknown, but as it is said, it’s a small world. It is very likely for them to meet because they both belong to showbiz, where she is a model and Tik Tok superstar.

Tayler first posted a cute little TikTok, including Sommer Ray and Tayler Holder. He also publishes a funny Snapchat chat between them, captioning it “Boo’d up @sommerray”. Tayler made it official by posting a series of photos with Sommer!!

All of a sudden, Sommer unfollows Tayler on Instagram! What might be the reason? A viral video of Tayler having lunch with Charly Jordan, who is an ex Clubhouse BH member. When Sommer was questioned about blocking Charly, she says, “I didn’t even block her. She can message me right now.”

It turns out the rumors about Tayler and Charly were true! Charly and Tayler have been dating for a while now. Check out their Instagram for some adorable photos!

Q1. Who has Tayler Holder Dated?

Q2. How old is Tayler Holder?